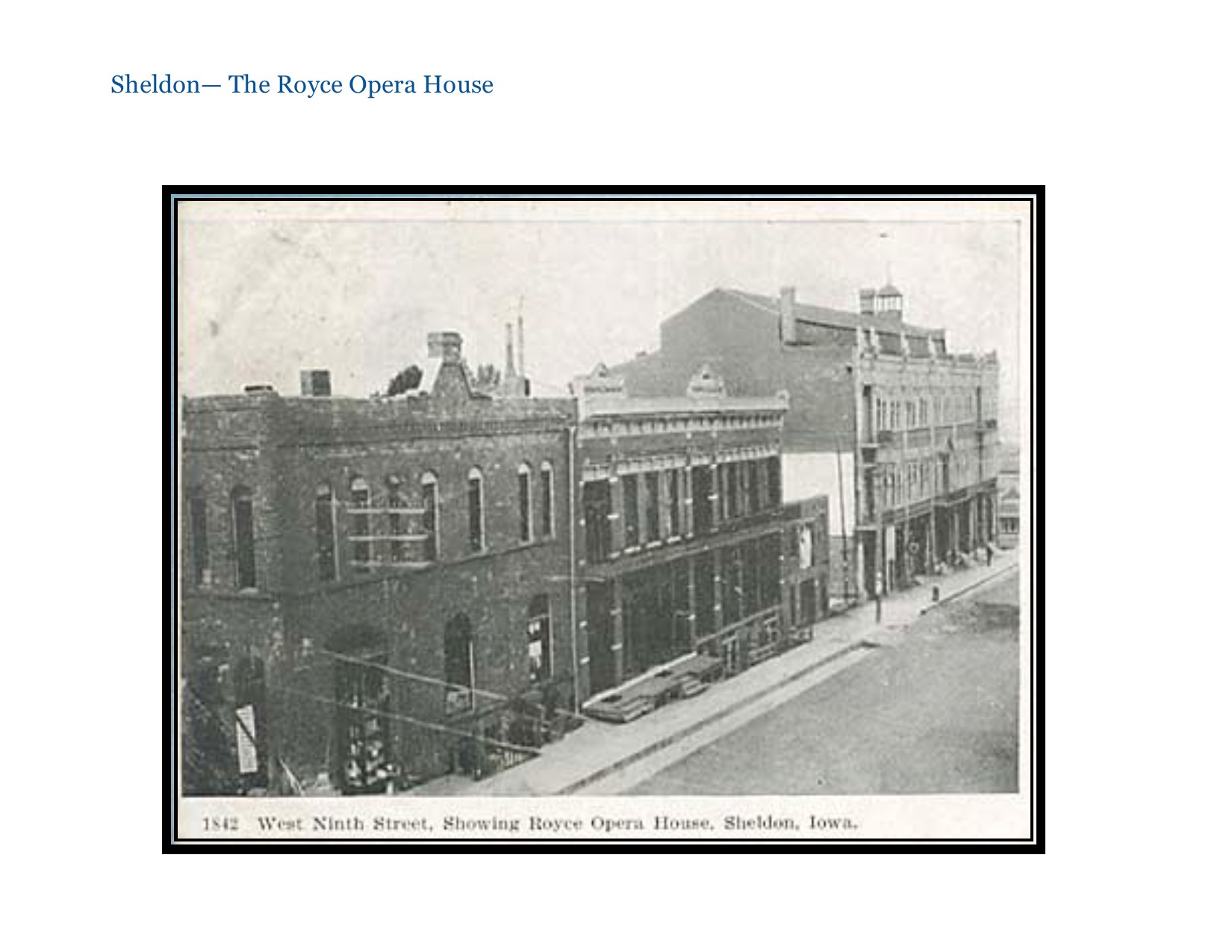 The Royce Opera House
Mr. Edwin Royce moved his family to Sheldon from the Aplington area in Butler County in the late 1880’s. Originally from Wisconsin, he had made his fortune buying and selling Iowa farmland. In Sheldon, Mr. Royce started a land, loan and abstract company and built the ornate Royce Hotel. Mr. Royce served as Sheldon’s mayor in 1894 and 1895 and was instrumental in getting the waste water and sewer system put in. In 1893,

Edwin Royce started building an opera house with grand plans for a building 50 feet by 150 feet and three stories tall. The construction phase was riddled with problems and it took ten years for the building to be considered completed. The front of the ground level was planned to house businesses. Rooms on the second floor were intended to be used as hotel rooms by those who traveled to attend events held at the opera house. These rooms opened onto the balconies of the auditorium. The stage filled the west side of the building. There were three levels of boxes on each side of the stage, two balconies and orchestra seating. The total number of seats including the balconies, boxes and orchestra seats came to 2,000.

Unfortunately, the Royce Opera House was never used. The City of Sheldon condemned the building before it opened, not trusting the construction methods used. According to the history compiled by the O’Brien County Bell titled, “The First 100 Years, O’Brien County 1860-1960”, Mr. Royce used long columns filled with cement, plaster, rocks and wood as support for the Royce Opera House. The Bell further explains Mr. Royce’s idea was a precursor to reinforced concrete and would have worked if he had also used steel rebar. Upon Mr. Royce’s death in 1907, four years after its completion, the building was ordered torn down. It took a large crew over four months to complete the demolition.
History derived from “Prairie Queen Newsletter 2008”

A perfect example of a repurposed building can be found in the old Sheldon Eagles Club building on Fourth Avenue in Sheldon. Mark Wenck purchased the building in early November, 2012 and has remodeled the front half to house The Barber Shop. Opening in January of 2013, The Barber Shop features a sports theme, carried out in the décor with a bit of  influence from the 50’s. During the remodeling process, a hardwood floor was uncovered and refinished. The back bar from the Eagles Club was also repurposed into a barber’s storage and counter after being refinished and fitted with a new countertop. Galvanized steel and two Koken Presidential barber chairs from the 1950’s, along with retro styled seating in the waiting area, give The Barber Shop a unique atmosphere. The back portion of the 3,024 square foot building will soon be home to Urban Alley, a business that will sell refurbished and homemade furniture along with other items.
Source: The Sheldon Mail-Sun January 9, 2013

The Sheldon Bank was the first bank in Sheldon. It was established by Ed C. Brown, in a small frame building. Around 1888, a fine building made of Sioux Falls red granite was built in the popular castle style of that era on the southwest corner of the 9th Street and 3rd Avenue intersection to house the bank. Mr. Brown was a highly respected man in the community—a man of experience who had formerly been both a soldier and a homesteader. It was therefore a surprise to the community when the Sheldon Bank failed in 1903. The bank went into the hands of a receiver, Mr. R.W. Ady and the assets and proceedings were in the courts for many years. Mr. Ed C. Brown was indicted, tried and acquitted on charges of embezzlement—his trial lasting one full week. In the courts, the Sheldon Bank paid a dividend of seventy-three percent.

In 1912, local investors decided to create the Sheldon Savings Bank, opening in January of that year in the same building that formerly housed the Sheldon Bank. The officers of this new bank were William Myers, president; Dr. W. H. Myers,  vice-president; E. B. Myers, cashier; John Versteeg, assistant cashier; Dr. F. L. Myers, John H. Archer and Fred E. Frisbee, directors. At this time, Frisbee and Archer held interests in several other banks in the county, especially the First National Bank in Sheldon where Fred E. Frisbee was listed as president and manager while J. H. Archer was acting vice-president. The Myers Brothers were among the most successful and conservative real estate owners in Sheldon and the president, William Myers, was owner of a large and successful department store.

In 1927, the Sheldon Savings Bank became part of the First National Bank. This was a bank that had its modest beginnings in 1888 when capital to develop the area was in high demand. When the First National Bank closed, it became the Security State Bank.  Today, the unique stone building that was built to house the first bank in Sheldon has been repurposed into a  retail store named Time After Time. The building has weathered the past 100 plus year well and it is one of Sheldon’s beautiful historic buildings.

Past and Present of O’Brien and Osceola Counties, Iowa by Hon. J.L.E. Peck and Hon. O.H. Montzheimer for O’Brien County; 1914; B.F. Bowen & Company, Inc.; Indianapolis, IN 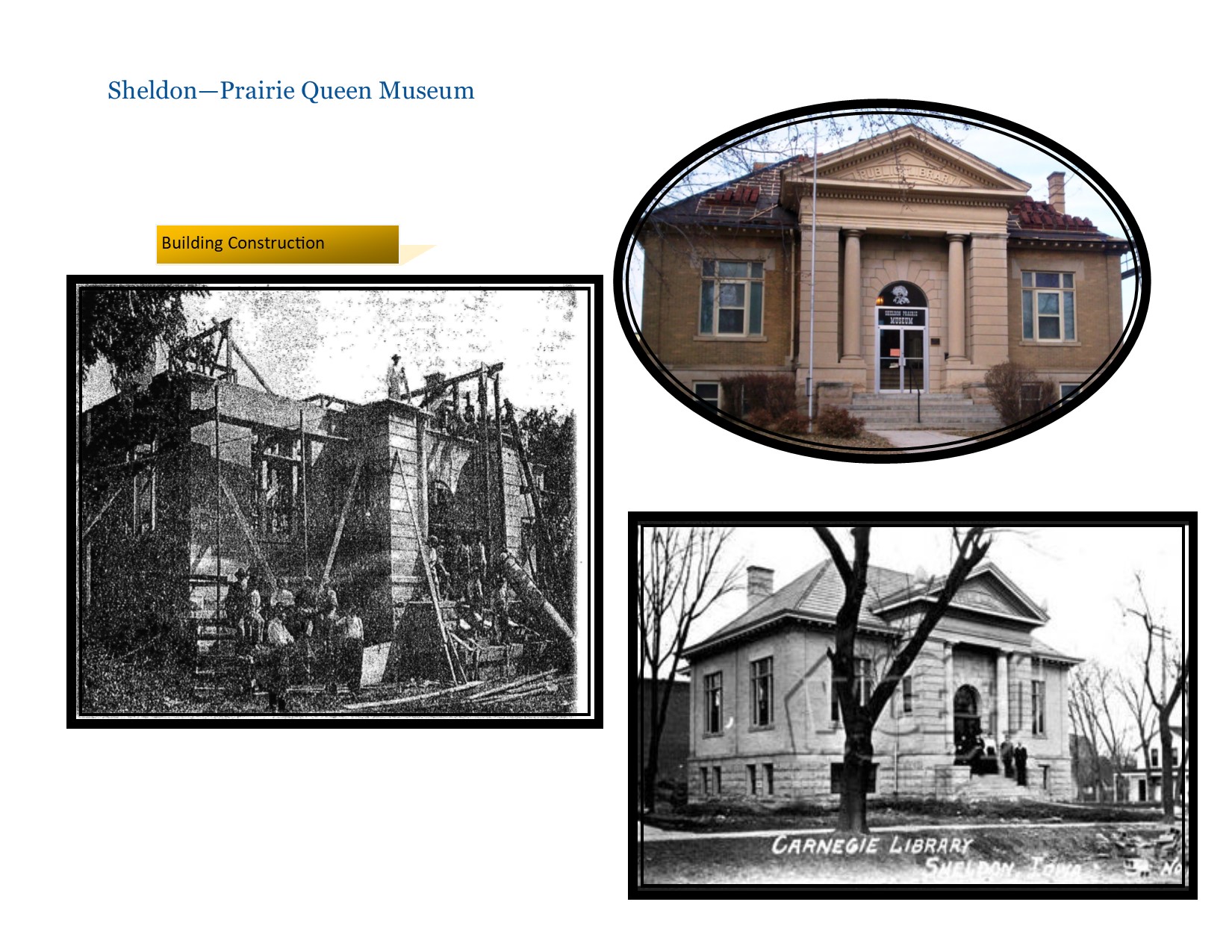 The Sheldon Prairie Queen Museum
With the rapid growth from a reading room established by a ladies circle and first housed above a hardware store in 1894 to a city owned library with a city tax passed for library support in 1897, the need for a more permanent library building became quickly apparent. In 1906, the City of Sheldon received word that Andrew Carnegie had agreed to furnish a free public library building under certain conditions. The City Council had to pass a resolution to provide support and a building site. After some disagreement on the ideal location, the city council and community club decided to build the new library on the corner of 10th Street and 4th Avenue. A building committee was formed and they hired architect Paul O. Moratz, of Bloomington, IL, who had designed over 20 Carnegie libraries. His fee was $230.00. Sealed bids were taken and the winning bid was from H.M. Bosma of Sheldon at a cost of $9,200.00. The building was completed in the early spring of 1909 and the dedication service was held on March 26th.

A half century plus passed and Sheldon had soon outgrown their Carnegie Library. In 1969, a new library was built across the street to the east. Area 4 moved into the old library building for a while, but it was abandoned in 1975. In 1976, the    Sheldon Historical Society asked the city for the building for the purpose of housing a museum. The city agreed and in October of 1976, the Sheldon Prairie Museum opened. On April 11, 1977, the Sheldon Carnegie Library building was placed on the National Registry of Historic places.