The Freedom Rock Tour, created by the artist of The Freedom Rock; Ray "Bubba" Sorensen II, aims to boost tourism and spread the message of thanking our Veterans while providing a unique to their area Freedom Rock for all 99 counties in the great state of Iowa.

According to Sorensen, the O’Brien County rock is a record-setter.

“It’s huge,” he said. “It’s probably the largest I’ve done on the tour. People will definitely be able to see it from the road.”

Sorensen started work on the O’Brien County Freedom Rock Sept. 5. The mural features three separate paintings that pay homage to local veterans and others who sacrificed for America’s freedom.

The first painting features Daniel Pippinger, a Sanborn Civil War veteran who died in 1937 at the age of 97. Pippinger entered the Union Army at age 21 and eventually earned the rank of first lieutenant. 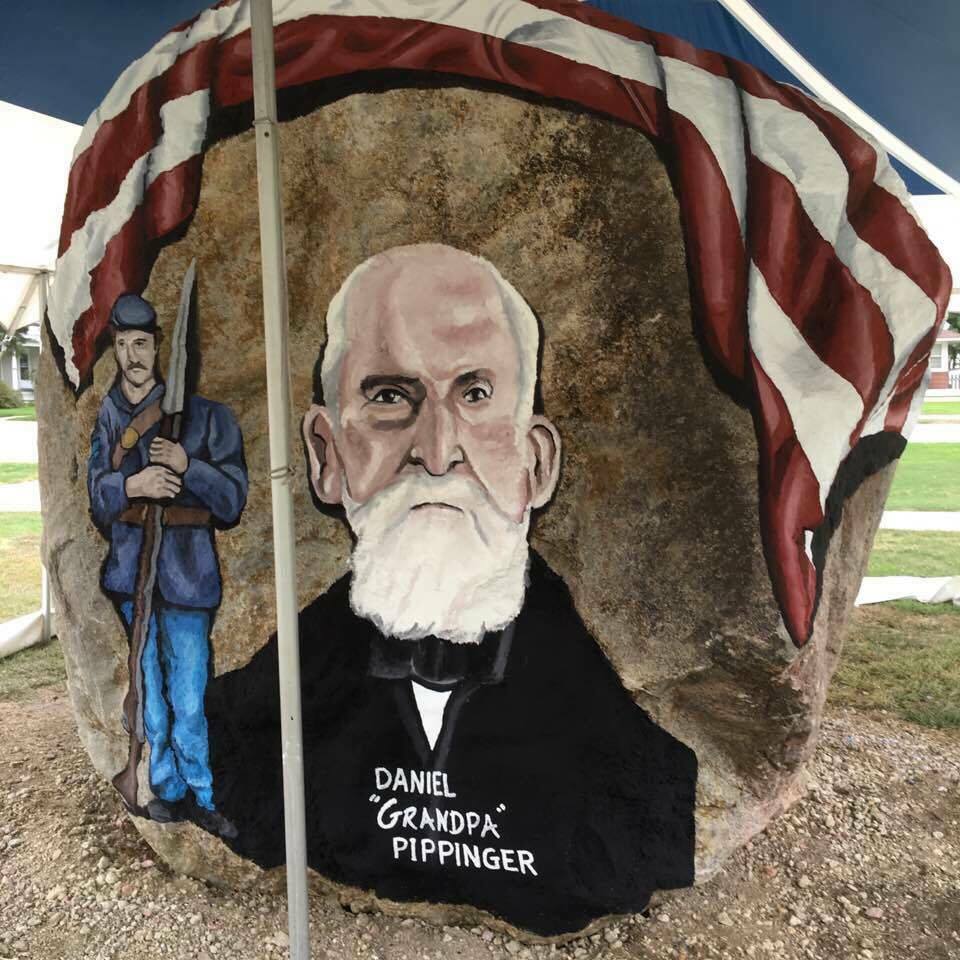 Sorensen said he added Pippinger because it brought some local flair to the rock.

“To me, putting this veteran on doesn’t make him any more important or less important than any other veteran in the community,” he said. “I just like to tell stories and illustrate stories. I don’t think that should be quelled in the spirit of being politically correct.” 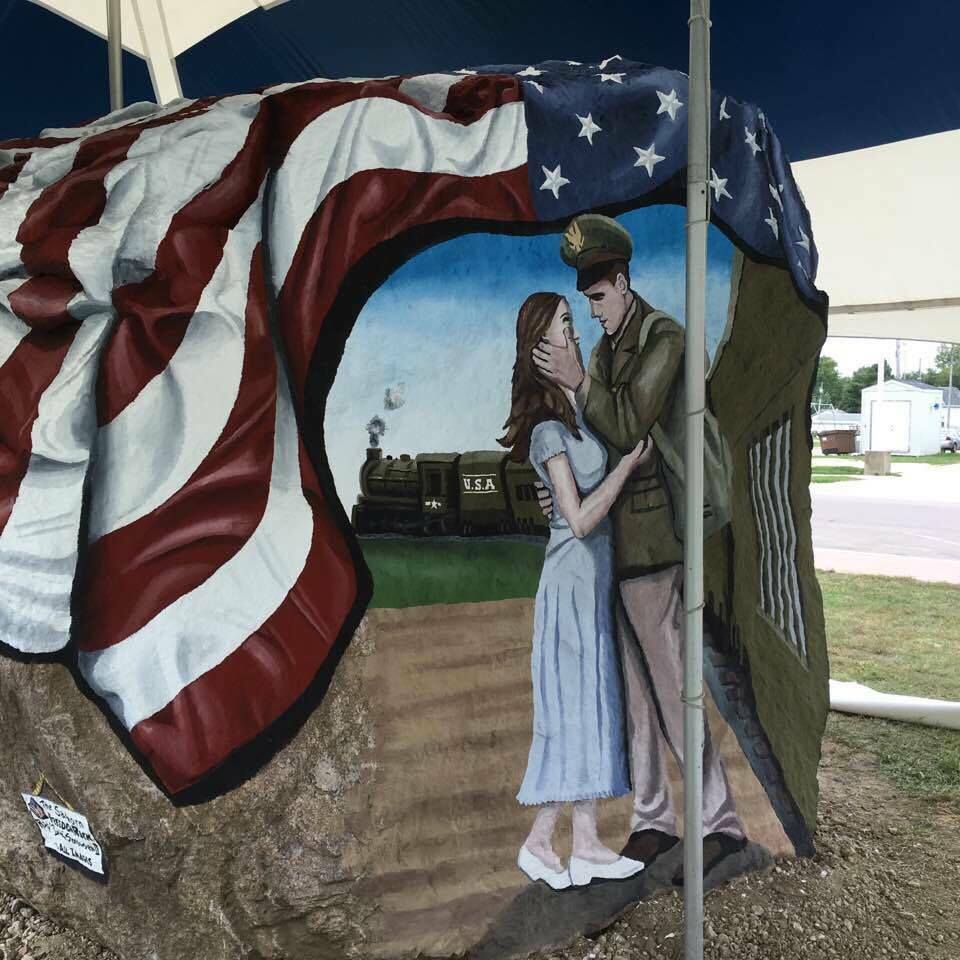 Another portion of the mural is a nod to Sanborn’s railroad heritage. It features a soldier and a woman at a train depot prior to his departure for war.

“There’s nothing more emotional, dramatic and iconic than a goodbye or hello kiss from war,” said Sorensen.

Finally, the mural honors victims of the 9/11 terrorist attacks with depictions of the Twin Towers, Pentagon, United Flight 93 and a U.S. soldier. 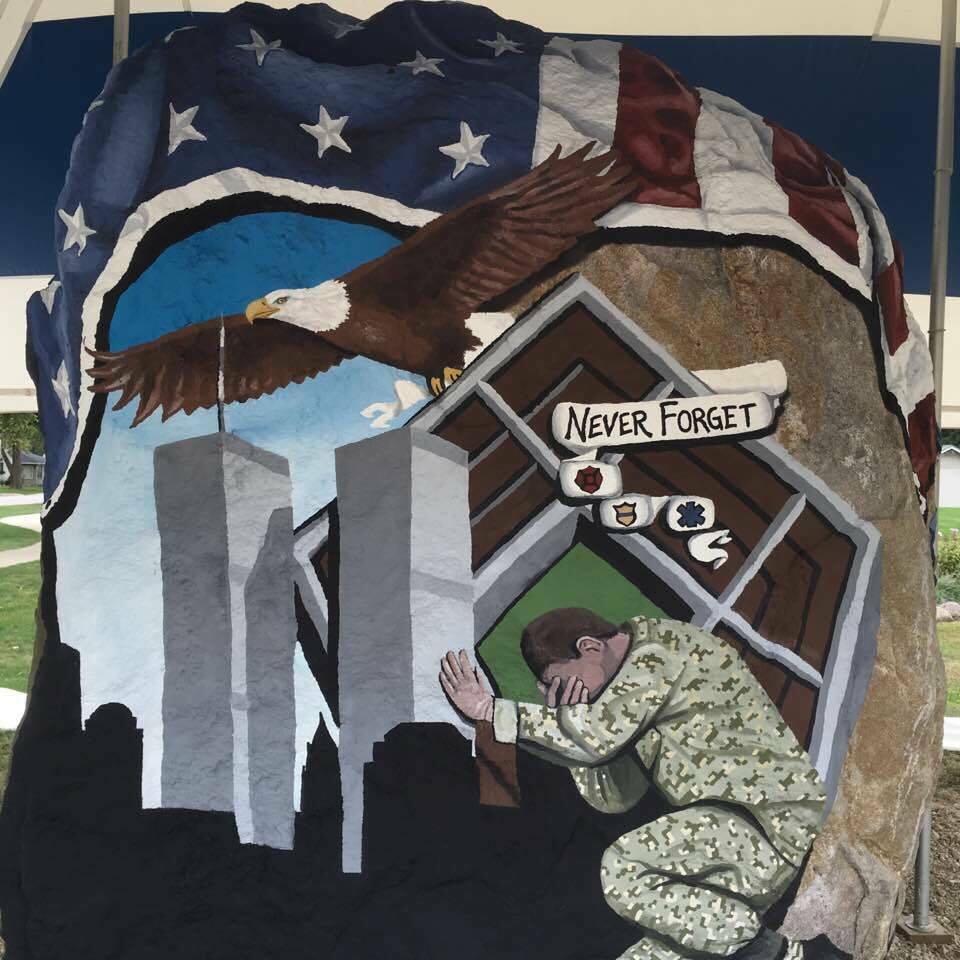 “I had a couple goals when I started this project: Thank veterans, promote Iowa tourism and feed my family,” he said. “I figure if I can accomplish those three, it’s better than doing a lot of things.”

The O’Brien County Freedom Rock didn’t happen over night. Fundraising efforts got underway 2 ½ years ago and was led by Vander Werff & Associates of Sanborn, which helped secure the rock and organize Sorensen’s visit. So far, more than $16,000 has been raised for the project.

According to Shannon Rydberg of Vander Werff & Associates, donations are still being accepted for future expenses like landscaping at the Freedom Rock site. A majority of the current total will be exhausted to pay Sorensen, cover the rock’s moving fees and for other costs.

Rydberg said multiple area businesses, community organizations and individuals have donated to the project. She encouraged others to contribute and help O’Brien County stand out among other Freedom Rock sites.

“The rock’s size is awesome because it kind of sets O’Brien County apart,” she said. “But we want to do a lot more so it’s even better.”

Nearby Freedom Rocks are located in Everly, George, Hawarden and Lake Park.