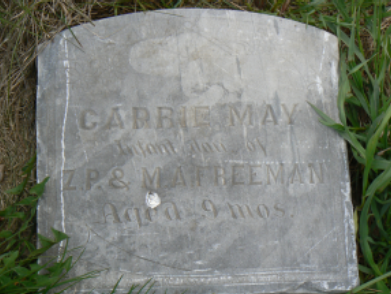 In April 1879, Highland Township  trustees acquired one acre of land from Z.P. Freeman and his wife to serve as an organized burial site.  In May 1880, an additional acre was purchased from Hannah Bascom.  Many stones bear the names of early Highland Township families. 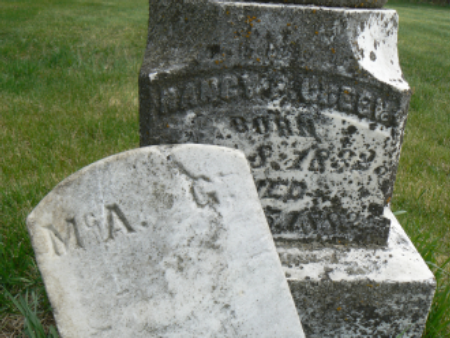 McAllen Green and his wife, Nancy, arrived in O’Brien County in 1869 from Sterling, IL.  The family had owned a mercantile business until it was destroyed in a fire.  They moved west with their two sons and began a homestead about 3 miles south of the cemetery.  McAllen Green was active in O’Brien County’s early politics. In 1875, McAllen and Nancy moved to Primghar and operated the former Albright Hotel where the First National Bank now stands.

An interesting stone in the cemetery’s SW corner marks the grave of Sadie Larabee.  It looks like a tree trunk with ferns growing at its base. Often in cemetery symbolism, a tree represents the “all covering love of Christ in the tree of life” while ferns are used to indicate sorrow. 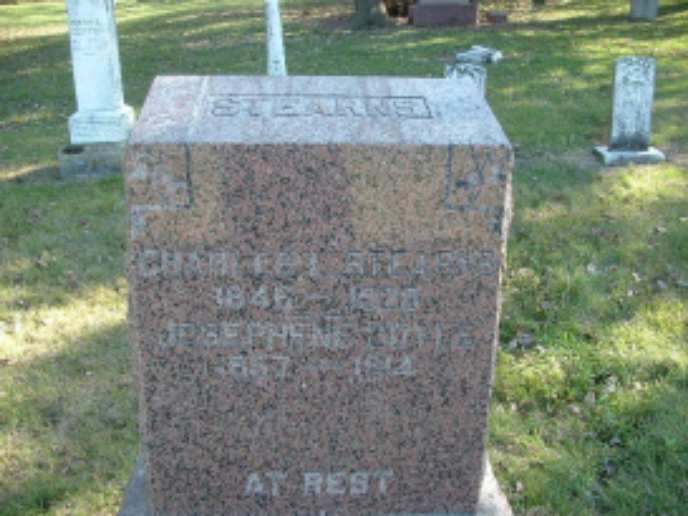 “One by one, the pioneers of O’Brien county are passing on to that new country yet unknown. The latest to fall before Time’s scythe is Charley Stearns, who homesteaded in Grant township in 1879.

Jovial in the extreme, small in stature, he was always full of pep and good cheer and loved a joke or a good story as well as anyone we ever knew. He took the hardships of pioneer life with a smile, the blizzards of winter, the heat of summer, and the scourge of the grasshoppers never robbed him of his smile, his faith in God, or his belief in O’Brien county, which he was firmly convinced was the original Garden of Eden.

In the year 1869 he came west with his old friend George Hardin, and in 1870 filed on a homestead on section 14 in Highland township, and five years later he was married to Miss Josephine Doyle, daughter of George and Maranda Doyle. They lived on their homestead for many years, enduring the hardships of pioneer life, including hard winters and grasshopper time.

In September, 1883, he bought the old home on section 6 in Grant township, where his family might have the privilege of church, school and Sunday school of that community.”

Taken from a newspaper obituary. “In the death of Mrs. Charles Stearns of Grant Township, another of the early settlers of the county has passed away. She and her husband have lived on the farm where she died for more than forty years.  She was a splendid woman in every way; the daughter of Mr. and Mrs. G.W. Doyle, of honored and cherished memory.

The internment was made Sunday evening in the Doyle graveyard, one of the very first in the county, on her father’s homestead.”

Taken from a newspaper obituary 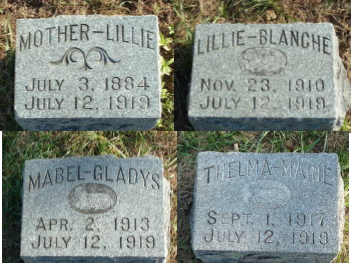 Five died, two were seriously injured, and two had minor injuries as a work train hit a car in a blind crossing.  Four members of the Virgil family and Rev. William Kennedy perished.  George Virgil, husband and father of the victims, his two sons, Floyd & Harold, and daughter, Ethel, escaped with injuries.  The accident was the most appalling of its nature to have occurred in the county up until that time.  It brought sorrow to their relatives and horror to the entire community. 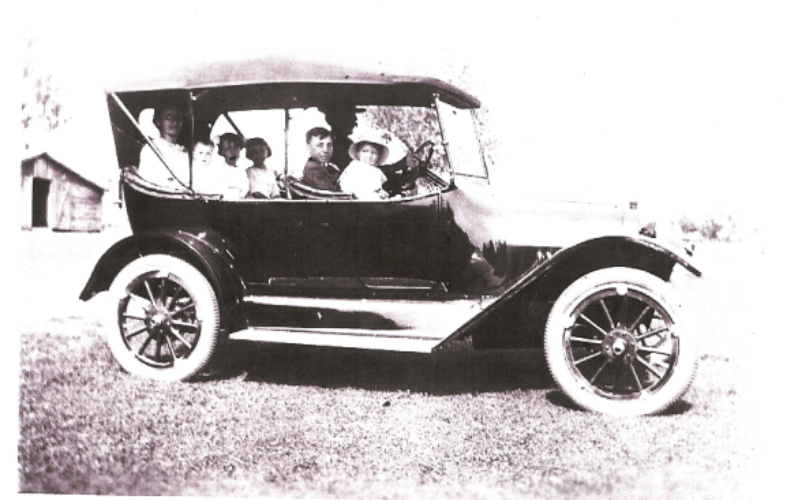 The crossing where the accident took place was a very bad one.  The wagon road ran east and west, and the Illinois Central railroad track north and south.

A deep cut and bank prevented the train from being seen from the wagon road.

Rev. Kennedy had been to the Virgil farm on a Saturday afternoon to assist in harvesting oats.  Mr. and Mrs. Virgil, six small children and Rev. Kennedy got into Mr. Virgil’s Chevrolet car to go to Gaza, just 3/4 mile away.

They approached the crossing without seeing any train.  When squarely upon the track, a train consisting of an engine and a caboose struck them and crushed the car.  A Negro railroad laborer who lived in a small shack just north of the crossing and who saw the accident said he thought Mrs. Virgil tried to throw her baby, Thelma, aged two years, out and then tried to jump from the car.  She was unsuccessful.  All of the other bodies and all of people who escaped with their lives were found in the car. 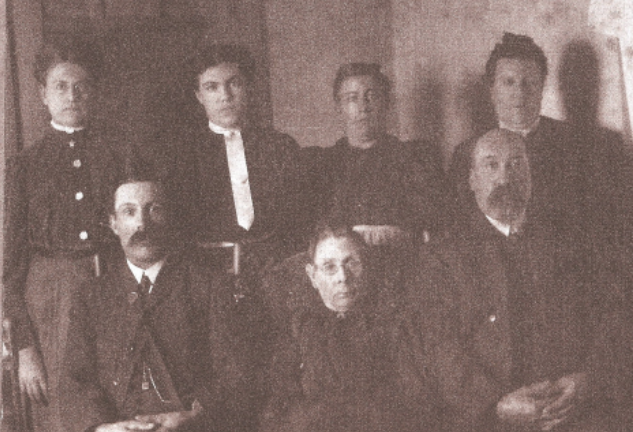 William and Emily came to O’Brien County and farmed here in 1870.