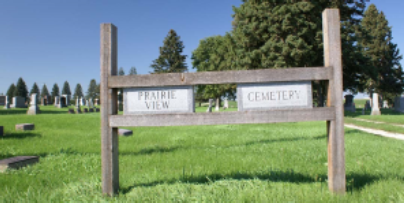 When the town of Paullina began there was little thought of a cemetery.  However in 1883, as the number of “sickly folks” increased, a group of concerned citizens began looking at the possibility of purchasing land near town as a burial plot.  In Nov 1884, the Union Township trustees purchased 5 acres of land for $30/acre.  The name was changed from Union Township Cemetery to Prairie View in 1898.  In 1940, an additional 7 acres of land was acquired to the west of the road and called Prairie View West. 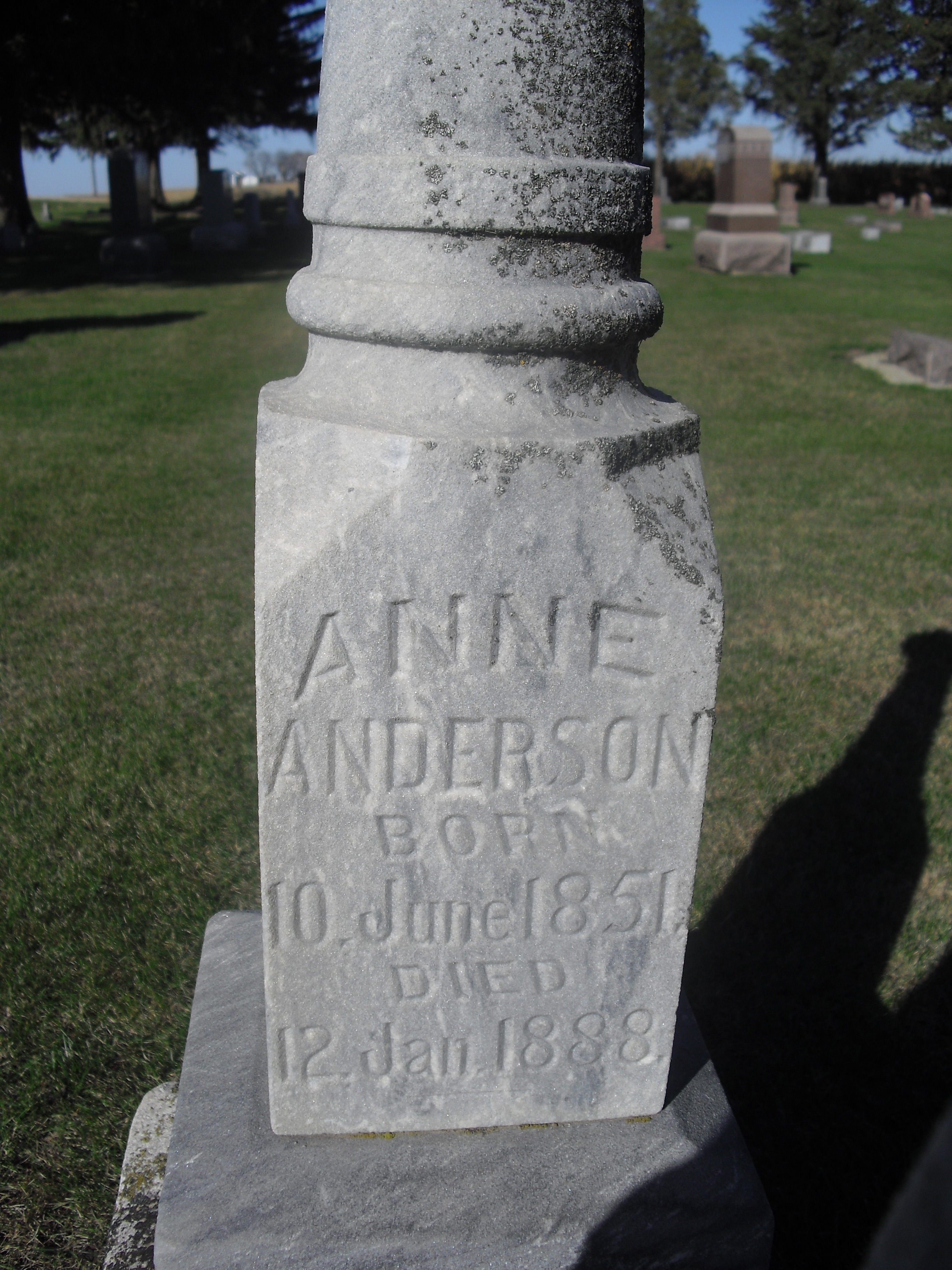 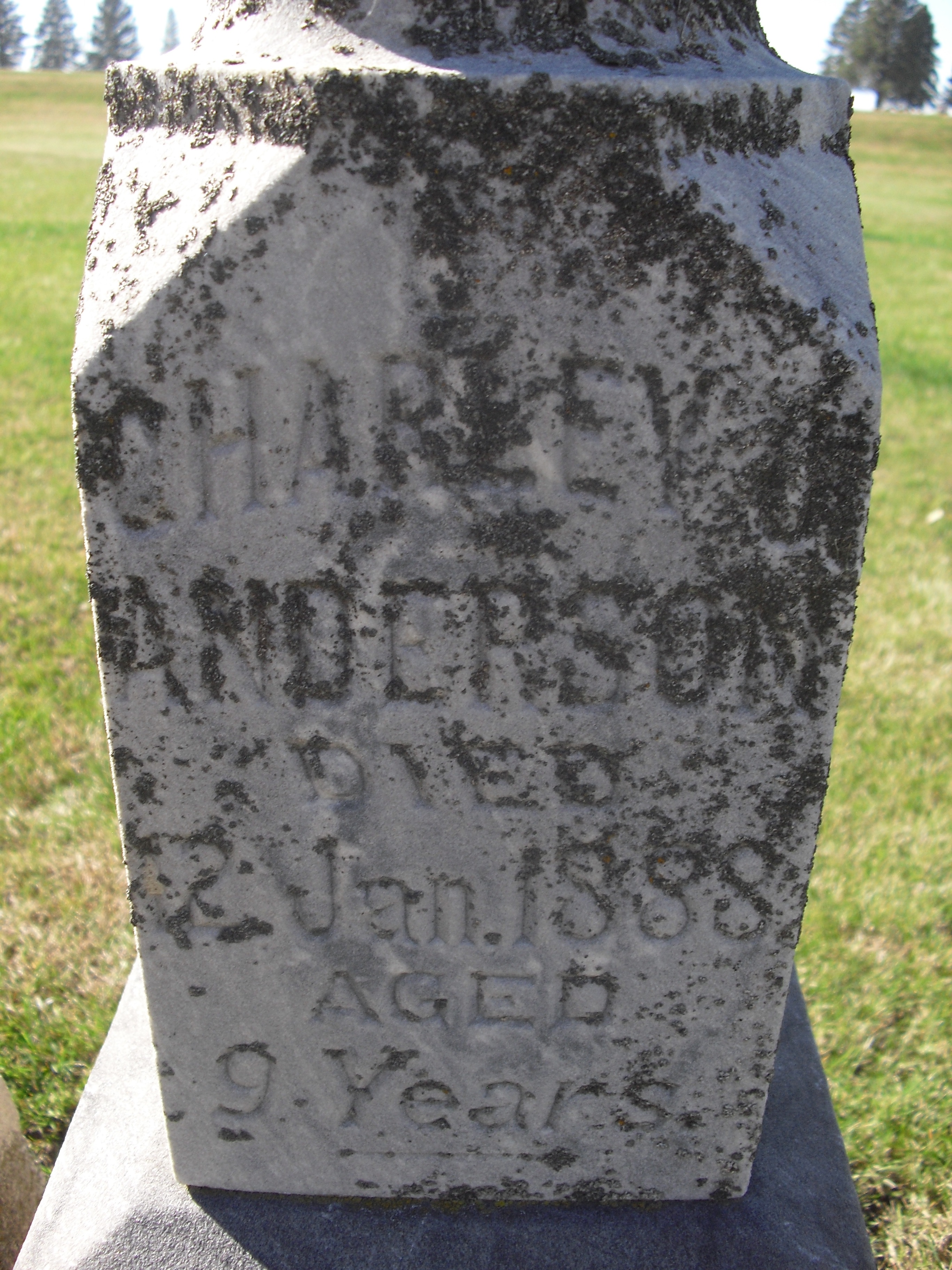 A monument marked the resting place of three victims of the memorable big blizzard that struck the area on January 12, 1888.  The blizzard was widespread covering over seven states.  The reported deaths of people from freezing included ten in O’Brien County.

These three lived on the NE corner of Section 8 in Dale Township.  They may have became frightened as the storm worsened and decided to walk to Mrs. Anderson’s brother’s place located farther west on the same section.  They were found two days later by neighbors about 40 rods from their house - one by a fence and the other two, who became separated, were nearby.

The storm was remarkable in that the day started out mild, and the temperatures dropped over 60 degrees in a matter of hours.  There were no roads to speak of; the trees that were planted around farm places offered little or no help because they were not tall enough yet to break the wind.

Many houses were not much more than shacks in those days.  Communication was poor.  There were no telephones to help spread the news of an approaching storm; so this one struck suddenly and fiercely.  For anyone caught out, they were lucky if they found shelter before they become too exhausted to move. 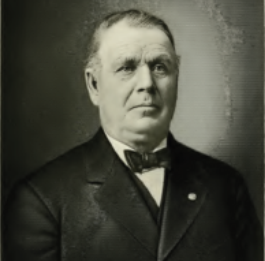 William’s description published in the O’Brien County History begins, “The gentleman whose name stands alone is widely known throughout O'Brien county and is one of the honored citizens of Paullina.  The town of Paullina is much indebted to him for the keen int erest he has always taken in any movement having as its object the betterment of the social, moral, material or educational welfare of the town.”

At the age of 21, William started out a life for himself by working on a farm in Illinois.  In 1862, he enlisted at Kankakee, IL.  Throughout his service to the Union, William endured many hardships and privations. He was injured at an engagement at  Jackson, MS and was taken captive to Libby prison.  From there, he was released into a Richmond, Virginia hospital.  He was paroled and returned to Chicago in January, 1864.  He rejoined his regiment at Memphis, TN in the spring.  Again he was taken prisoner into Andersonville prison.  Upon his release on July 1, 1865, he returned to Illinois and engaged in farming there.

After 12 years, he sold the property he had acquired and came to O’Brien County. 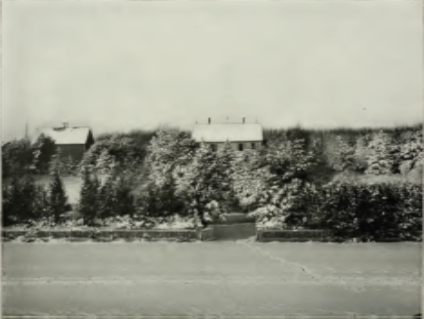 He purchased 640 acres of prairie land for $10/acre.  It was his desire to bring the farm under an excellent state of cultivation.  He also prided himself on raising graded cattle stock.

His description concludes, “ Mr. Beebe is one of those stanch men of intelligence and depth of character so essential to the best growth and development of any community and fortunate indeed is that locality which can number among its citizens men of this type.” 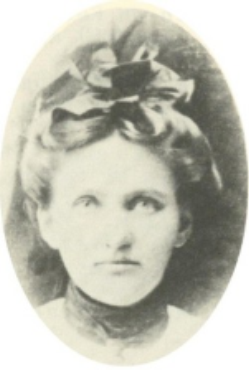 Mary was born in Marshall County, IA and moved to Paullina to care for her father.  She married Corrie Burson in 1922. Together they owned the grocery store in Paullina until 1939. 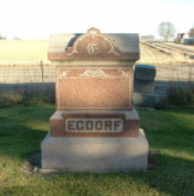 William Egdorf was a native of Germany.  He accompanied his parents to this country in his youth.  Soon after arriving, he found employment as a farm hand.  True to the teachings of his childhood, he labored diligently and lived with characteristic German thrift.  In 1889, he came to O’Brien County and rented a quarter section of land.  He directed his efforts with diligence and sound judgment and at the end of four years could purchase a 160 acre tract of land.  Additional land acres were acquired over time.

William was known throughout the community as a “conservative gentleman of unquestioned integrity, upright and honorable in his dealings and a citizen of sterling worth. 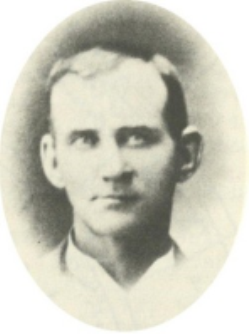 Charles was born in Illinois.  At the age of 10, he traveled with his parents and siblings in a covered wagon to Marshall County IA.   In 1886, he again moved with his parents to O’Brien County.  After farming for many years, Charles left to farm to become an auctioneer and manage a harness shop.  During the time that Charles lived in Paullina, he also served as mayor.

Ina was born in Germany and came to Plymouth County, IA in 1887.  He married Sarah Moser in 1895 and had two children.  However, the hand of death laid upon the mother, and she passed away in 1904.  Ina married Anna Stern in 1906.

Ina’s holdings of farm land increased in size, and he owned over 800 acres of valuable farm property in O’Brien County Iowa and South Dakota.  He was described as “a man who has labored assiduously and steadily, finding time to take an interest in movements looking toward the general uplifting of the community.”

Herbert was born in Sutherland, Iowa.  The family moved to Paullina shortly after his birth.  After graduating from Paullina High School, Herbert joined the National Youth Administration in Milford to study radio.  He received his amateur license.  Herbert served for nearly four years during WWII in the Navy and spent 19 months in the Pacific.  After his discharge, he married Marian Sweeney in 1946.  Over the next 31 years, he served with five Federal Agencies including the Federal Aviation Administration.