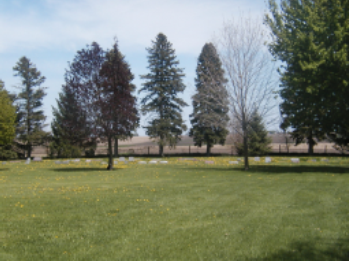 The Paullina Monthly meeting of Friends Cemetery was officially established in 1875.  The Rockwell family, one of the original pioneering families, gave the land for construction of the meeting house, a school house and the burial grounds.
The first burial in the cemetery was August 15, 1885.  Most people buried there have been connected with the Quaker faith or were from the original Norwegian settlers to the area.  People are buried in 4 rows in the order of their deaths with a space left for their spouse.  At the present time, people of the Mapleside Quaker community dig the graves and take care of the grounds.

The Scandinavians had many small settlements in Northwest Iowa, but were more scattered than the Germans or Hollanders. The most noted definite colony perhaps was the Scandinavian Quaker settlement in South Dale and Highland, where they supported a Quaker church and school, and held services Wednesday as well as Sunday. The Archibald Henderson family was one of the original members. 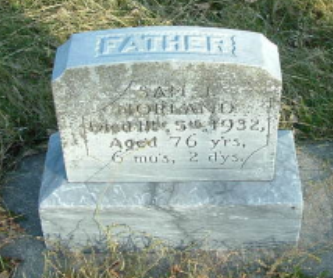 On January 12, 1888, a fierce blizzard struck the Midwestern states without warning.  Ten people in O’Brien county lost their lives, and many others lost their way.  Sam Norland, living near Paullina, was caught in the storm, but very fortunately stumbled on to a straw stack, dug a hole and remained in it unharmed until morning. 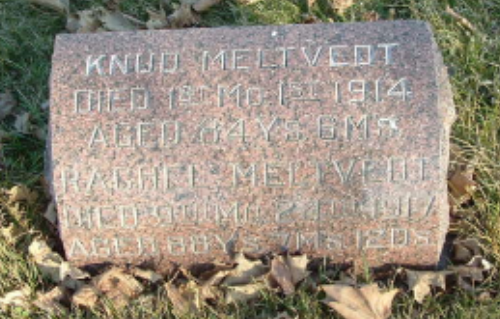 Knud was born in Norway and spent his early life there.  In 1853, he was united in marriage to Ragnild Rovenass (Rachel). Throughout his youth Knud had heard glowing reports of the golden opportunities awaiting a willing worker in the New World. In 1866, he brought his family across the broad seas to seek their fortunes amid the broad prairies of Iowa.  They started their home in Marshall County, Iowa and at the expiration of 20 years of energetic labor and proverbial Norwegian thrift were able to purchase a 640 acre tract of land in O’Brien County.  The ground was broken and planted, comfortable buildings erected and improvements made.  Here their declining years were spent.