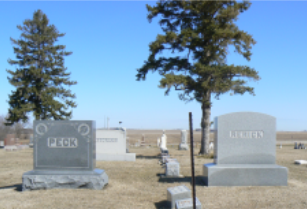 Several headstones bearing the names of the founding families of Primghar lie in a row facing town.  An observation in an old document commented that those who worked and lived so that the town would prosper all faced the town they loved in death. 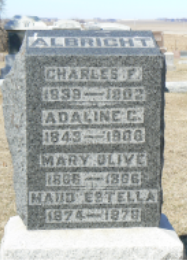 Born in Danville, PA on September 22, 1839, Charles Albright migrated to Iowa and served in the Civil War with the second Iowa Infantry. 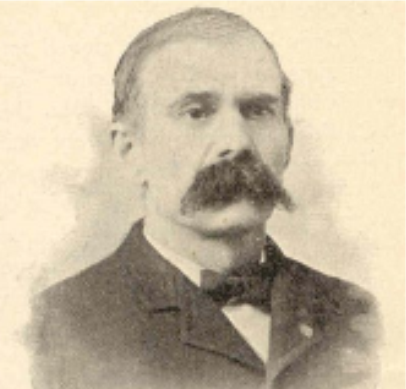 He participated in battles at Fort Donelson, Shiloh and Corinth.

In 1865, he married Adaline McElwain and lived for time around Durant, Iowa.  Along with others from Cedar County, he moved to the prairies of O’Brien in the spring of 1871 and staked a homestead in Highland Township.  Today this farm is Primghar’s city park and fairground.

The Albright home was a small, single story affair that 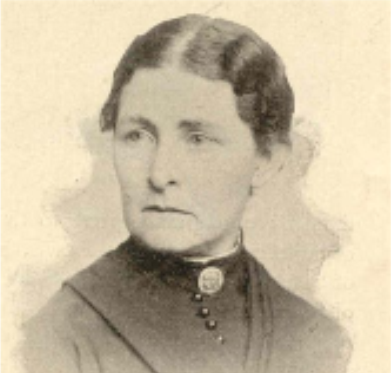 became a general stopping place for travelers.  One visitor recalled at least 20 people sleeping on the floor at one time in those very early days.

In the autumn of 1872, Mr. Albright assisted in the creation of Primghar, donating the “A” to the new name.  The following spring, he rented out his farm and built the town’s first hotel, which “was rushed for business” before the last board was nailed.  The Albright’s were known for their splendid hospitality and good food.  Scores of  county residents were aided during sickness by the gentle hand and comforting care of Adaline. Mr. Albright served as county supervisor and was elected the first mayor of Primghar. 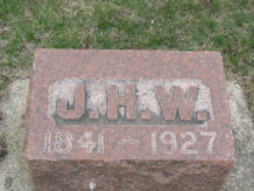 Jacob was born in Washington, PA.  He grew up on a farm and eventually was contracted to work at the Washington Examiner for four years, in exchange for room, board and clothing. He enlisted in the Union Army and served 1863-1865, part of the time under Sherman.

On September 4, 1865 he married Sarah Jane Mickey, daughter of a wealthy Pennsylvania congressman. They had five children.  In 1873, the Wolf family came to O’Brien County.  He wrote a column for the Sheldon Mail titled “Notes from 97-41” and was one of the first to criticize conditions in county government.  He was elected clerk of Franklin Township at the time that it was organized and served in that capacity until 1900.  He also served as a county supervisor from 1879-1881 and was active in placing the county on a stable financial basis.

In 1883, he purchased the Sanborn Pioneer and, with his sons, published it for 15 years.  In 1894, he bought the O’Brien County Bell with Thomas Gravenor.  They erected the brick building in Primghar on the northeast corner of the square which later served as Hubert Schultz’s office building.  Wolf moved to Primghar in 1900 and continued publishing the Bell until 1925.  He then sold it to his son, Fred.  At the age of 84, he was the oldest active newspaperman in Iowa. 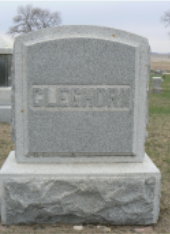 Anderson Cleghorn served in the 22nd Iowa Infantry during the Civil War and was wounded in the battle of Vicksburg.  He and his wife, Mary, settled in Highland Township in 1870.  Anderson drove a stage coach that carried passengers and mail from Primghar to Cherokee twice a week.  He was also a self-made veterinarian.

This flowing description of Mary Cleghorn was found the November 5, 1914 edition of the Primghar paper.  “Mary Cleghorn knew the hardships of pioneer life and was closely associated with the development of this county.  Times and circumstances have changed much since she came to O’Brien County but she was a woman who could adapt herself to the various changes of life and her life was a perfect example that happiness is found in one’s self.  She was always known for her happy congenial and kindly disposition and a thorough enjoyment of her home and family.  Her hospitality was boundless.  Friendless and poor always found a helping hand or a home at her door.  Nothing inconvenienced her if it were administration to the needs of others.  She exemplified the highest ideal of a noble life – not by words but by deeds.” 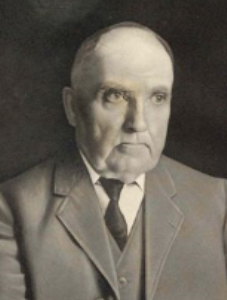 John Licinius Everett Peck was 27 when he walked into Primghar in 1877.  He was a teacher turned lawyer, and he formed a law partnership with Isaac Daggett.  In 1879, he was elected County Auditor for 2 terms.  He participated in the re-bonding of the county’s debt, laid out over 800 miles of roadways within the county and was instrumental in bringing about a peaceful solution to the Sanborn Courthouse raid of 1882.  He was one of the 10 men who signed the guarantee which brought the Illinois Central Railway to Primghar.  Peck served as mayor,    councilman, and president of the local school board for 15 years.  He was also the cashier and manager of the Primghar State Bank and director and stockholder for the Primghar Savings Bank. 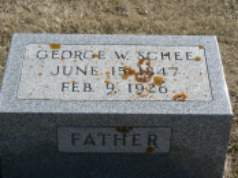 At the age of 16, George enlisted in the 3rd Iowa Infantry, participating in many engagements in the Civil War.  In 1871, he began his homestead in Carroll Township.  He also taught rural school for a time and began a well drilling business in the area.

In 1875, he was elected County Auditor and expended great effort to putting the county’s finances in order.  In 1877, he married Elizabeth Dunning and over the years were parents of four children.  The youngest, Arlington, was the first burial at Pleasant Hill in 1888.

George was admitted to the bar in 1880, became involved in banking and real estate and served a total of 8 years in the Iowa House.  He was known as the “Primghar Philanthropist” donating to and sponsoring countless worthy causes.  One of the largest projects provided a U.S. flag to every rural schoolhouse in the state. 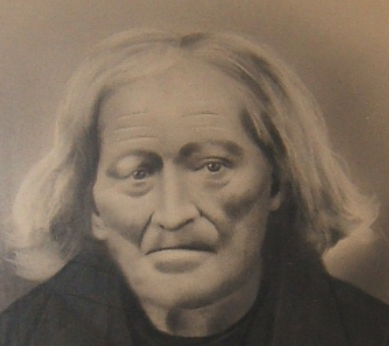 Lewis was born in Maryland and moved to Indiana in 1822.  They started the journey in a cart but this gave out and they were obliged to make the remainder of the distance on horseback and foot. Lewis married Malinda Shaffer in 1840.  The couple had ten children.

Two of the Clark daughters married and moved to O’Brien County.  Malinda passed away in 1897, after which Lewis married her sister Sarah Shaffer Pitsenburger.  Sarah died in 1911 and is buried in this cemetery.

Lewis was a farmer and made a good living for himself and his family.  He held several local offices.  He was President of the Old Settlers Association  He was also a noted abolitionist and was a station agent on the underground railway.  Many a poor negro found him a true friend. 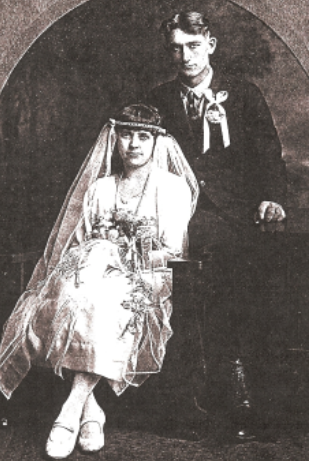 Many of the early settlers had family  members spread out in burial sites throughout the county.
Clarence Steffens & Emma Steuck Steffens have family members at the Immanuel Church and Steuck cemeteries. 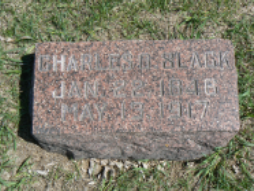 Charles Slack’s parents, William and Lucy are resting at the Covey Church Cemetery.