German farmers, mostly immigrants that had originally   settled in Illinois, bought land from the railroad in Caledonia  Township, O’Brien County, Iowa in the late 1870’s and early 1880’s.  They were mostly Lutheran in background and mostly very young.  The faithful, God-fearing families began holding church services in homes and by October 1, 1878 officially organized to become St. John Lutheran Church. There were so few people in 1870 that a separate census of the township was not taken. However, by 1880, the US census for Caledonia Township already showed hundreds of people living there.  It soon became apparent that holding services in homes was not very practical.  The congregation decided, in January 1881, to construct a new church/school building on 10 acres of land donated by a member, Henry Richter, for that purpose.  Part of this land was also set aside as the church cemetery, and thus began St John Lutheran Cemetery. 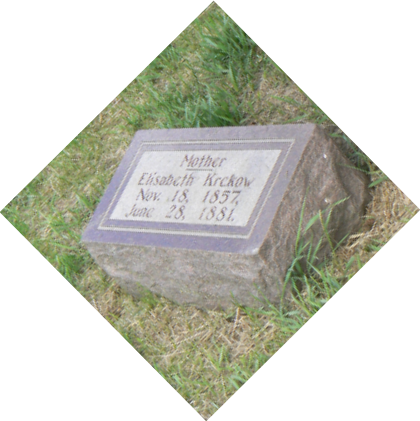 The first burial on the cemetery took place less than 6 months after the construction of the church.  On June 28, 1881, a tornado struck the area south of Marcus, IA where another group of Lutherans had formed a congregation called Trinity Lutheran Church.  They did not yet have a cemetery on that date.  Tragically a member of the congregation, Elizabeth Krekow, was killed in the storm.

Her family wished to have her buried in a Lutheran cemetery. She became the first burial in this cemetery.

Children below the age of 14 were buried in separate rows from adults. The second row contains the graves of 5 children from the same family (Strubing).  The 5 children died within 47 months. This was indeed a horrifying time for the Christ and Maria Strubing family. 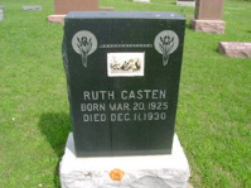 All cemeteries have those who died before their time.  Ruth Casten is a prime example here.

The five year old child lost her life in an automobile accident in 1930.  Her parents, numb with grief, chose a black stone to be placed at their daughter’s grave.  On that stone is a photograph of the automobile in which Ruth lost her life.  The photograph was somehow embedded in stone and placed on the black grave marker, a testament for all to see of the tragedy that had befallen the family.