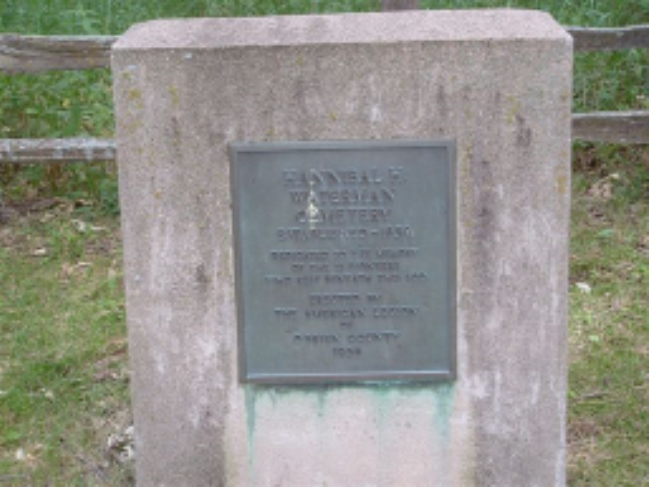 Follow the path through the tallgrass  prairie 1/2 mile to the east to find the family cemetery of Hannibal and Hannah Waterman.
The Watermans established this plot in 1859 as a place for their son.  There were seventeen pioneers buried here but  15 remain.  Only a few headstones now mark the burial sites. Archibald Murray and James DeWitt, originally buried here, were  disinterred and moved to the Waterman Cemetery near Sutherland.

Hannibal and Hannah had 11 children.  The seven daughters “grew to adulthood and were a credit to their communities.”  All four boys died when they were very young.  Owen and Leon’s headstones remain visible in the cemetery.

Luther Head was born in New Hampshire.  He married and had two children.  He enlisted in the 8th New Hampshire Infantry in October, 1861.  He served as a hospital nurse and medic.  He was discharged in 1865 and came to O’Brien County in March, 1870.
Due to his medical background, he was frequently referred to as Dr. Head; and people sought his advice on related matters. In July 1872, the O’Brien Pioneer reported that Dr. Luther Head was in “precarious health” and that he was leaving for the mountains to recuperate.   In August, a letter was received from South Pass City, Wyoming Territory, stating that the good doctor was feeling some better. He returned to O’Brien County in mid-September still very ill and died of consumption on September 21, 1872 leaving a wife and two small children.

The other people buried in the Waterman family cemetery include: Mr. Hycks, Mr. Prins, a baby from the Judd Allen family, Mr. & Mrs. Robinson and their 19 year old daughter and 18 year old son,  Mr. & Mrs. Swim, a baby boy - age unknown, and two children of the Coffmans.

The Watermans were generous with the use of their family cemetery and opened it to others in the community.