C. J. Sieh and his wife, with H.P. Sieh established the Sutherland cemetery in 1885.  In 1888, the cemetery’s name was changed to Waterman Cemetery.  In 1902, the Waterman Cemetery Association was organized.  The Association purchased additional ground. Finances for the association were raised in its beginning by popular subscription and sale of lots.  Acquisition in 1932 of a 120-acre farm, by a defaulted mortgage, provided revenue to make improvements to the cemetery.  The large monument in the center of the cemetery is dedicated to the Watermans as the first white settlers and to the civil war veterans, especially James P. Martin. 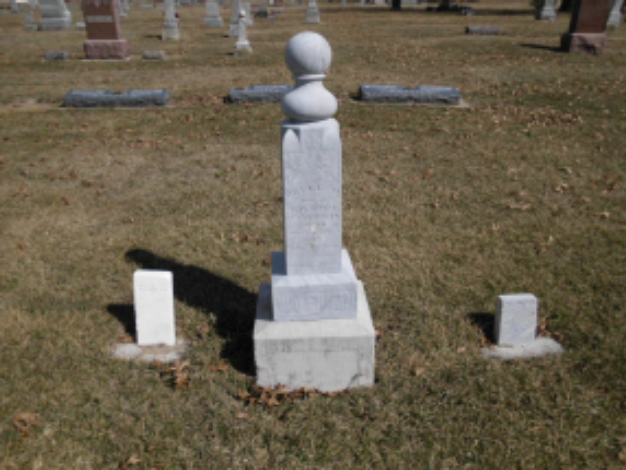 Hannibal H Waterman, his wife Hannah H and one child, Emily, were the first white settlers in O’Brien County.  They arrived in July, 1856 and exercised squatters rights on land in Waterman Township. Hannibal later filed his claim when the land office opened in Sioux City.

In March 1857, after surviving a very harsh winter, the band of Indians that perpetrated the Spirit Lake Massacre camped at the Watermans.  The Indians stole from the Watermans and scuffled with Mr. Waterman but the presence of Indian Charley, a friend amongst them, helped to prevent violence.

Their daughter, Anna, born May 30, 1857 was the first white child born in O’Brien County. They were the parents of 11 children.  Four sons died in infancy or childhood.  The Watermans established their own cemetery on a hill east of their home. 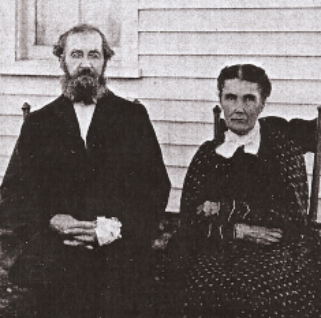 Hannibal held the offices of Treasurer, Recorder and Superintendent of Schools in the early county history. Hannah was the first school teacher in the county, holding classes in her home for the first two terms. Later she taught the first school at a log building in O’Brien.

In December of 1859 Mr. Waterman was approached by Mr. James Bosler of Sioux City about organizing the county.  In February, 1860, an election was held in the Waterman’s home with a total of seven votes cast. Mr. Bosler and 7 or 8 others milked the county financially before it had any population.   Mr. Waterman was used by the gang to give a semblance of honest to the organization.  Mr. Waterman was totally innocent of wrong doing.

Hannibal and Hannah added to their original claim by paying $1.25/acre.  The Watermans were devout and honest people always willing to lend a hand to those in need.

In 1898 Mr. and Mrs. Waterman left their home of over 40 years and moved to Sutherland’s east side.  They were called the Father and Mother of O’Brien County. 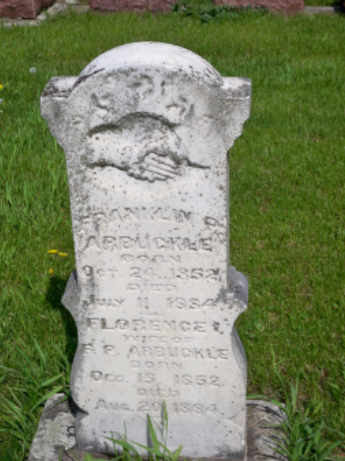 The first internment in the Waterman cemetery is from 1884 and is marked with an unpretentious, weatherworn, white headstone as the final resting place of Mr. and Mrs. Franklin Arbuckle.
History recalls that tragedy occasioned the first burial in the cemetery.  Mr. Arbuckle, was killed by lightening in a terrific windstorm in July 1884, as he lifted the trap door of the cellar for his family to get away from the storm.
Tragedy dogged the family still further, for only six months after Mr. Arbuckle’s death, Mrs. Arbuckle, despondent over her bereavement, took her life by poison.  She sent her small son, then too young to attend school, with the older children that day and committed suicide sometime after their departure.  She was missing when they returned home in the afternoon.  It was several days later that her body was found some distance from the house, near a creek.
Some headstones bear dates earlier than those of the Arbuckles, but hearsay is that they moved from other burial places to Waterman. 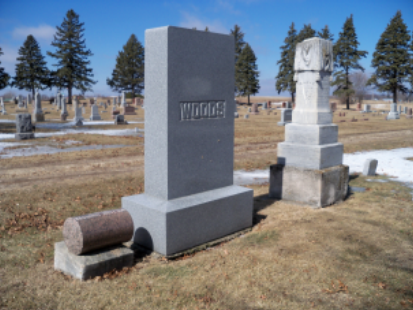 Sutherland has the oldest library in the state of Iowa in a town of its size.  The General N.B. Library was born of necessity, the real mother of all progress.  In the dark days of 1874, William came up with the idea of a library association.  He planned that the people who would read the books would support it.  People came from miles around getting magazines and weeklies to pass the time in their isolation during the winter.

William went to Des Moines and found enthusiasm matching his own in an old friend Adjt. General N.B. Baker, whom all Iowa loved during the Civil War and after.  These two men formulated the constitution and by-laws.  The dear old general  gathered as full a list as possible of the state’s publications with his own hands and sent them to O’Brien County.  Within 3 weeks, the library had 39 subscribers.  A meeting was held in the Woods cabin, officers were elected, constitution and by-laws were adopted and it was named the Gen. N.B. Baker Library.

There was room in the cabin for an improvised bookcase; one of the book shelves was soon given up to the

new library and shelves put over the windows.   Upon learning of the library, old friends of the Woods sent boxes of books and magazines.  The next spring another room was added to the cabin, one end was filled with book shelves.  For 2 ½ years all went well.  In mid-summer 1876 came the grasshoppers which filled the air with their silvery whiteness and covered the ground with their brown ugliness.  When time came to pay library dues only two people in the association could afford to pay them.

In 1881, the library was moved to Sutherland.  It was not so well appreciated by the people who were busy building up a town.
Mrs. Wood had the library in their house.

The present library is in an abandoned school building.  It was established as the Woods Memorial, and is the permanent home of the NB Baker Library Association.  It is owned by the city of Sutherland. 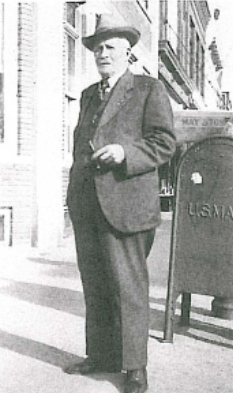 In 1852, when he was a child of five years, the family migrated to America, making the ocean voyage in an old type sailing vessel.  The trip required seven weeks enroute.

When the war broke out between the states, the four older brothers answered the call to arms. Young James, too, felt the urge.  With his father’s permission, he enlisted in the service at the age of 16.  He was inducted in the service on September 22, 1864, and was a member of the Co H of the 1st Wisconsin Heavy Artillery. He served until the close of the war, participating in various minor skirmishes.  He was stationed in Fort Lyons, VA and was on guard duty outside the capitol the night President Lincoln was assassinated.  He was one of those by whom the news of the tragedy was relayed along the lines.  He was honorably discharged June 26, 1865 and returned to his Wisconsin home to resume farming.  In 1886, James and his wife and children moved to O’Brien County.

The White Owl Cigar Company, honored the avid cigar smoker, Grandpa Martin.  They must have thought he was good advertising.  On his 100th birthday, they made for him a large box of 100 White Owl cigars. 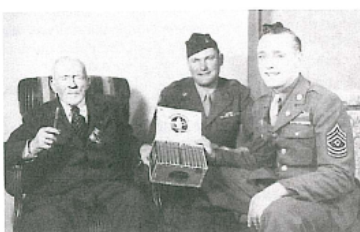 In 1949, James passed away with the honor of being Iowa’s last Civil War Veteran.  Iowans of all ages and denominations gathered in Sutherland’s white frame Methodist Church to pay tribute to a man who was virtually as old as the State of Iowa.  Members of every branch of the service, unable to get inside the church, mingled in mute respect, beneath the shade of the trees which grew in the community of Sutherland during the time of James P. Martin.

Thus did a long and active life draw to a close and the passing of a page in history.  For here, in the heart of the Atomic Age, lived a man who cast a ballot for Abraham Lincoln and who answered the call to arms for the defense of the Union. 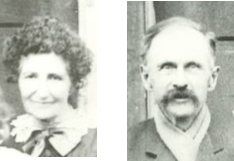 Samuel Josiah Jordan was born in Ohio.  His parents were pioneers in that part of the country which was without railroads and covered with a heavy forest at that time.  The family was subject to many hardships and privations.  Schools were scarce and poor and boys were kept at home as 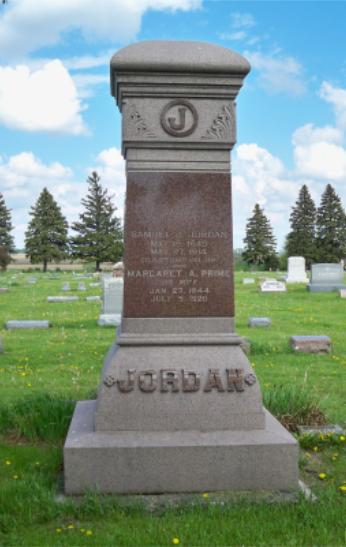 soon as they were old enough to work.
Samuel enlisted in the 67th Ohio Voluntary Infantry for the Civil War and served in the Army of the Potomac under Grant and took part in the siege of Petersburg.  The privations and exposure endured in this siege were almost beyond endurance.  One-half of his regiment died or were killed during the month they were in the trenches before Petersburg.  This undermined his health and he was very ill for several years after his discharge in December 1865.

He came to Story County, Iowa, in 1868, and was there married to Margaret A. Prime.  They moved to O'Brien County in the early spring of 1869 and homesteaded in Grant Township, which was their home until his death.

Samuel recognized the advantage of feeding cattle and began by buying all the calves he could find about the county.  He raised and fattened them for market.  From this small beginning his business increased until he was the heaviest feeder in the county.

Samuel was one of the workers for the location of Sutherland on its present site, and became a stockholder in the First National Bank of Sutherland soon after its organization. At that organization, he was elected to the position of President at which he still held at his death. 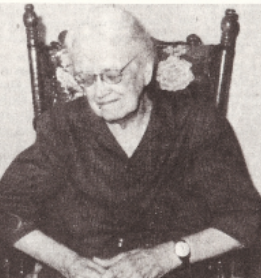 Mary Williams, born Nov 28, 1884, was Sutherland’s oldest living native born citizen still making her home in Sutherland at the time of America’s Bicentennial in 1976.  She lived for 10 years after that.  She was the only daughter in a family of four children.  Her brother, Tom Williams, was the first boy born in Sutherland.  Her two other brothers were Charlie and John.

Her father, John Williams, came to Sutherland in 1882 from Bristol, WI where he managed a grain elevator.  At the time      Wisconsin was not the grain country that Iowa was becoming so the Northwestern railroad company offered to move William’s elevator to Sutherland. He tore down the building and shipped it to Iowa.  This was the first freight into Sutherland.

Mary lived in the same house for 82 years.  For two years she and her family lived on a farm near Sutherland, but she kept her house in town into which they moved again.

Archibald was born in New York.  He came west in 1885 and went into the land business in Winnebago County, Iowa where he remained three years. About that time, he entered into the Indian service and was with the 196th Iowa for several years.  He served in western Iowa and other places.
Archibald was the county’s first district clerk and surveyor.  For thirteen years, he participated in all the public business and doings of this county.  He filled every office in the county except county superintendent. He was judge at its first election. He built the "old log court house," as likewise the "not-to-be-over-eighteen feet-square” court house.

Archibald succeeded in engrafting himself into the good will of the homesteaders.  He was a whole-souled, generous man, both individually and with the public funds, and was, in fact, a man whom people liked. He was originally buried at the Waterman family cemetery but was later moved into town.