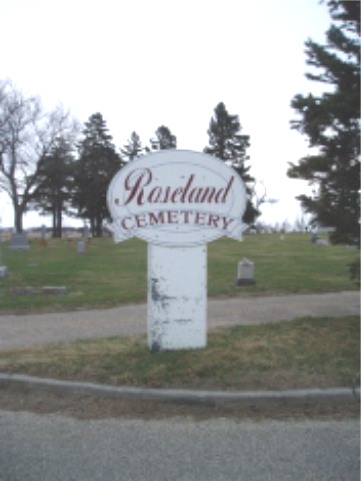 For several decades, funeral processions comprised of horse drawn wagons and black clad mourners in carriages and on foot wound their way from Sanborn west over the prairie to a plot of ground in the northwest corner of Section 34, Franklin Township.  At certain times of the year, wagon wheel ruts remain visible in portions of the pasture due east of the cemetery proper.

The land was purchased from Vernon Phelps on July 6, 1880 by the trustees.  The five acres were re-surveyed into plots and “streets” in 1883 when the township and young city of Sanborn combined forces.  Some graves had to be moved to configure with the new survey.  The area was fenced and some trees planted.  Lot prices were set at five dollars.

In the southwest portion of the graveyard lies a spot commonly known as “Potter’s Field,” the final, unmarked resting place for those early “travelers of the road” who remain nameless and forgotten. 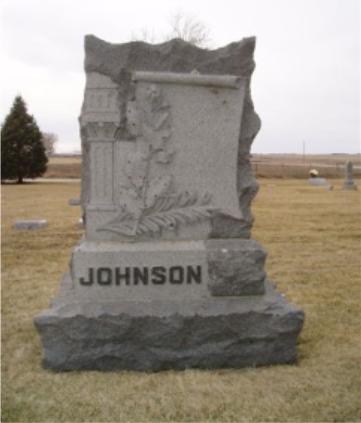 The town of Primghar was barely on the map when Edna Caroline Green entered the world as the second child of William Clark and Malvinah (Kidder) Green.  She was the first baby born in the new county seat village.  Her father operated the first store in the county at Old O’Brien in 1869 and repeated the same at Primghar.

Two O’Brien County pioneer families were united on May 24, 1899 when Edna married John A. Johnson, son of Mr. & Mrs. W.W. Johnson.  The Johnsons were prominent Sanborn citizens who came to O’Brien County in 1871 and later operated lumber yards in Primghar, Paullina and Sanborn. 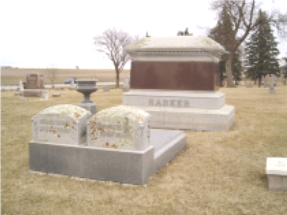 The largest monument in the cemetery marks the final resting place of Elizabeth and William Harker who came to the Sanborn community in late 1880 from Ida Grove.  William was a successful banker.  He and a partner established the O’Brien County bank in Sanborn.  Harker eventually bought out his partner and organized First National, a private bank of which he was president.  While doing an extensive banking, loan and land business, he was also involved in various community enterprises and organizations.  Noted as the wealthiest citizen of Sanborn, Mr. Harker was a modest, public spirited individual whose honesty, good judgment and fairness were never questioned.

Though the couple had no children of their own, they provided a home for an adopted infant daughter, two orphaned nieces and two foster sons.

At the height of his career, the banker’s health began to fail. 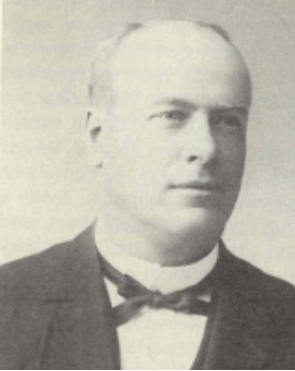 While taking treatment at West Baden Springs, IN on May 26, 1895, William Harker collapsed and died from an aneurism at the age of 46.  His unexpected death shocked the citizenry, who turned out en masse for the funeral.  In his will, Mr. Harker left the city of Sanborn $10,000 for the construction of an opera house; he also provided $5,000 for the erection of a suitable monument marking his grave.  Mrs. Harker contested the opera house provision of the will and won.

Following her husband’s death, Elizabeth served as president of First National Bank until it reorganized as Sanborn Savings in 1899.  For a time, she resided in Chicago but eventually returned to the area and died in Primghar on November 25, 1910. 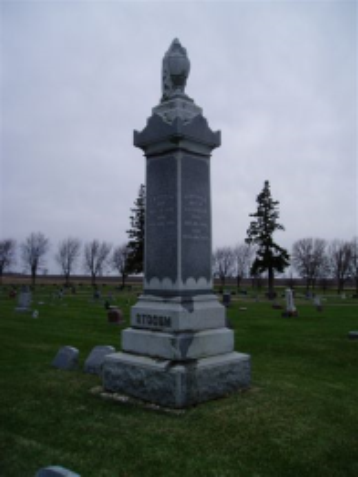 Jonathan and Pamela were the owners of the land where the town of Sanborn now sits.  They moved to the village from Chicago in 1881.  Following Pamela’s death, an October, 1894 newspaper reported a drayman hauled 12 wagon loads of stone to the burial site and workmen  constructed a $1,500 marker to the Stocums. 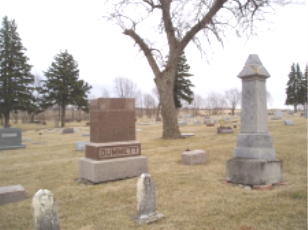 Born in New Jersey in 1841, W.H. Dummett moved with his parents to Ohio and then Benton County, Iowa in 1856.  He cast his first vote for Abraham Lincoln and enlisted in 1861, serving as a scout for the 6th Iowa Calvary.  Following the war, he married Mary Daily in 1869.  They farmed near Vinton for two years before deciding to take advantage of government land opportunities in northwest Iowa.  The spring of 1872 found the Dummett family in a covered wagon with a cow tied on behind heading across the tallgrass prairie for O’Brien County.  W.H. selected the NW of Section 8 in Franklin Township and built a sod house on a hilltop near a small spring.  Since they were the first settlers in the township, neighbors were scarce.  The nearest one was ten miles away. The family survived all the hardships pioneers must endure - prairie fires, severe blizzards, grasshopper epidemics and disease. During one winter, two children were lost to the dreaded diphtheria. 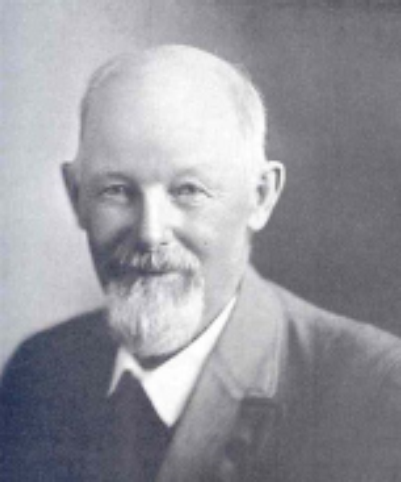 The W.H. Dummett family prospered due to diligence and hard work, ultimately farming 240 acres of improved land.  W.H. served as director of the rural school west of their farm, held various township offices, was   active in the Methodist church and belonged to Sanborn’s GAR chapter. 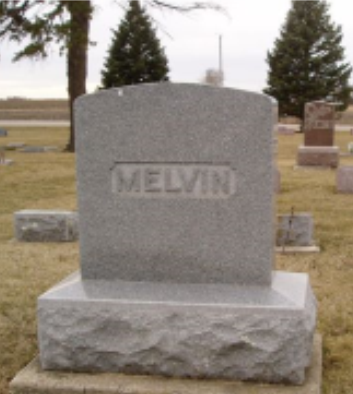 In the early 1870's, Edward P. Melvin farmed a mile and a half north of where Melvin is today. After a couple of years, he sold his farm and took up residence in Sanborn with his family. When the town of Melvin began in 1896, it was located a mile north of its present location and was named for one of the first families to locate in that area, the Melvins. 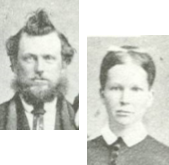 Jordan was a brother to Samuel Stephens who is buried at Waterman Cemetery near Sutherland.
Tennah was his wife. 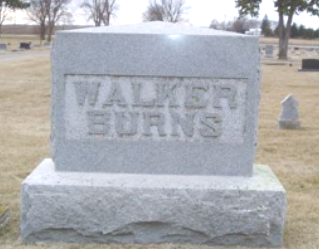 Edith was born in State Center, IA.  Her father established a homestead in 1872.  The next fall, Mr. Walker was elected to the Board of Supervisors; and in 1874, passed an exam and was admitted to the bar.  At the end of 1875, the family moved to a new house in Primghar where Mr. Walker continued his legal practice and land business.

Edith survived an attack of scarlet fever in 1879 and moved with her family to Sanborn in 1880. While she was attending school in 1882, her father established the first telephone line in the county from Sanborn to Primghar and another from Sanborn to Sheldon so that all his offices could be connected. 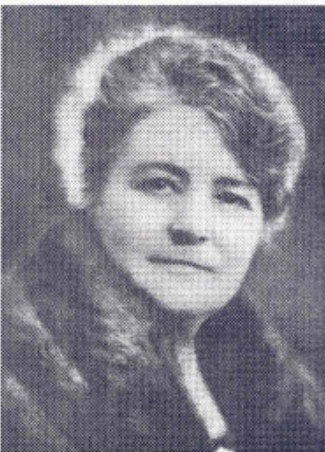 On April 27, 1892, in one of the “events” of the season, Edith married Mr. Michael Merrill Burns at the home of her parents.  M.M. was a successful conductor on the Chicago-Milwaukee Railroad who was left with two small daughters when his wife died around 1886.  The Burns’ moved into their new home on West 4th St. toward the end of 1892 and resided there throughout their married life.  In addition to the girls, they were parents of one son, Warren.

Edith was a very talented individual and used her musical and artistic abilities to the benefit of her community.  The spacious residence was the scene of many charitable and social events throughout the years.  At least two local organizations were founded within its walls - the Twentieth Century Club and the Milwaukee Railway Women’s Club.  Mrs. Burns was instrumental in organizing a library for Sanborn and responsible for penning the initial request to Andrew Carnegie for a building around 1910.  She was the library board president for 48 years and chair of the local Red Cross Unit.  After establishing a DAR chapter in Sanborn, she held several state offices in that organization. 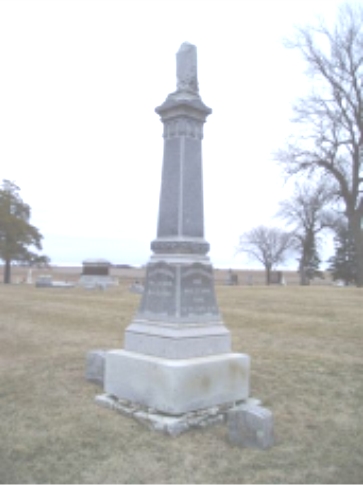 Frank Teabout was born in the state of New York in 1815, moving to Allamakee County in northeast Iowa around 1851.  He acquired large land holdings and established other businesses during the next 20 years.  He and his wife, Emily, were parents of a daughter, Angie, born in 1857.  In 1873, he moved to Northwest Iowa where he had purchased large tracts of land in Clay and O’Brien Counties.  When Sanborn was founded, he established several businesses and laid out an addition to the town on the south in 1880.

The severe winter of 1880-1881 paralyzed commerce in the area and was especially detrimental to the Teabout and Valleau firm.  Their failure was announced in the Pioneer of 1881.  Mr. Teabout continued to be a strong supporter and promoter of Sanborn, and in 1883, was elected mayor.  Also buried at the site are Mrs. Teabout and George Valleau, son-in-law.  The cost of the monument was $175.00 at the time it was installed.

Wiley practiced law in the Sioux City firm of Shull, Marshall, Mayne and Marks from February 1, 1946 until January 1967 when he entered Congress representing Iowa’s 6th Congressional District.  In January of 1975, after four terms, he returned to Sioux City to resume his law practice with his son, John.  Wiley continued to practice law until his retirement in 2005.