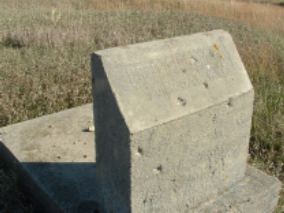 Fred (also called Dutch Fred or Dutchy) was a German immigrant who came to America to escape serving in King William’s Prussian army.  Fred left a wife and daughter behind because his “frau” would not follow him to so wild a country.

Fred worked for Hannibal Waterman for many years.  He had a one room cottage on this hillside and lived there until his death.  He received a quit-claim deed from the board of supervisors for building a 16’ wide bridge on Dog Creek crossing a military road.

Wanting to leave something for his daughter, he also homesteaded 80 acres on the west bank of the Little Sioux River.  He died just six months short of fulfilling his claim.

He wanted to be buried near his friend Archibald Murray but was instead buried on the land he owned.  Over the years, friends moved his grave farther up on the hillside to prevent it from “falling into the river.”

Commenting on the early politics of O’Brien County Fred said, “I am der peoples.  Der res all be officers.”