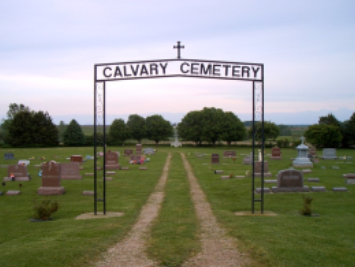 Established in October, 1907,  Calvary Cemetery began when Bishop Garrigan of Sioux City purchased the two acre plot from Henry and Delores Jalas for $400.  In 1919, the St. Ann’s Guild from the  Sacred Heart Catholic Church of Sutherland bought and erected the monument at the east end of the grounds. Robert N. Florine, the son of Knute and Christin (Norgaard) Florine was born in Cherokee.  He was called for active duty into the Army Air  Force at Des Moines on February 1, 1943 and discharged on September, 1945.

On July 15, 1945, he was given the Distinguished Flying Cross for extraordinary service and heroism during a mapping mission over Germany on December 24, 1944.  Flying at thirty thousand feet on a mapping run, Captain Florine observed two ME-262 jet fighters launch an attack on a friendly reconnaissance plane.  Seeing that the plane was badly damaged on the first pass and was at the mercy of the enemy, he did not hesitate to turn his unarmed aircraft into the path of the hostile fighters.  With utter  disregard for personal danger, he made a simulated head-on attack and by superior airmanship so occupied the enemy that the damaged aircraft was able to escape.  Captain Florine’s quick and daring action in attacking two of the enemy’s most vaunted fighters to save a fellow pilot is in keeping the traditions of the Army Air Force.

Robert had a total of 55 combat missions over enemy territory.  He was honorably discharged in 1945 but remained in reserve service until 1969 earning the rank of Lieutenant Colonel.

Robert married Frances Powell on September 5, 1945.  They farmed in the area and owned land near Sutherland.  Bob passed away on September 8, 1993.

Michael Joseph Lohberger loved to build things.  He built numerous buildings including the house his   family lived in.  Later, he built an “Ultra-Light “ airplane from a kit.  He took flying lessons and got a   pilot’s license.  The first time he actually flew his plane, he over corrected the banking, lost control and   crashed his plane.  He spent 41 days in the hospital and never flew again. Clarence Lohberger was born in Tama County.  He got    acquainted with O’Brien County when he came up one summer to herd cattle for his Uncle Frank Mathern.  He learned to ride a horse and kept the cattle from straying onto other farms – all this as an 11-12 year old.

Elizabeth Lohberger walked to a country school when she was young, preferring to walk through pastures and fields rather than the road.  The road with high grass on each side was too scary to walk by alone.  When she grew up and was married, she loved to bake.

She was perturbed when her baked goods wouldn’t rise while she was being treated for throat cancer.  She learned to bake and freeze the goods before she went for treatment. Raymond Deiterman was a Colonel’s aide and clerk typist in the Korean Conflict.  One evening he took   someone to a nearby town.  He wanted to get back to camp before it was dark, but the other person wasn’t   ready to leave.  He had to drive in the dark on unsecured roads and drove as fast as he dared, making sure that   he hit every   bump he could because he was upset with the other person for making him late and putting both of them in danger. John Deiterman served in the army during World War I.  His unit had marched in the rain all day on their way to      the front.  At checkup, he had a high fever and pneumonia.  He was put in the hospital.  One day he woke up and looked around asking the nurse, “Am I the only one alive in here?”  She told him that he was okay and not to  worry.  When he recovered, he was told the war was over.  You might say that pneumonia saved his life.

Josephine Deiterman taught rural school during World War I.  She came home to take care of her family. They were sick with the flu that was rampant at that time.  On the day they received the news that the war was over, her father and she were the only ones not sick.

They took the horse and buggy and went to town to join the people who were celebrating and dancing for joy. Michael Betz fought in the Civil War on the Union side.  He met his wife Elizabeth Gengler on an “arranged walk” by friends through a wooded area and ended up walking her home.  He wore a beard all of his life, and then they retired and moved to town.  One day he decided to have it shaved off.  When he came into the house, he was met by a confused woman with a broom chasing this stranger out of the house until he spoke to her.  She had never seen him clean shaven before.

Elizabeth Gengler was born in Germany and working as a laundress and ironer.  She walked from place to place carrying her sad-irons in a bag.  A man had been molesting women in the area, and one day he came across her walking.  She swung her irons at him.  They had no trouble identifying him the next day.  The blacksmith wore the marks of a sad-iron on his face.